skip to main | skip to sidebar

That's it. All done. I would like to thank Baccus 6mm, Freezywater Publications and The Lance and Longbow Society for their generous support with this project. It would never have been half the project it finally was without you all. Thanks also go to Steve, Steve, Graham and Leigh for their help and enthusiasm. They really helped keep it alive. It has been a fine adventure all the way and we have had a good amount of support from people at shows that has jollied us along nicely. Thanks, peeps, for your support and kind comments. The Baccus Games Day was a good way to go out and Steve's write-up below needs no additions. I am now knackered and burnt out. If ever I agree to put on a large show game again, please hit me on the head and tell me not to, even if it involves figures I already own and have painted!!
Posted by Ruaridh at 10:43 No comments:

And so it came to pass that the Towton boards and figures were wheeled out for their final outing. It may have only been two thirds the size of it's largest incarnation, as Leigh and Graham were not allowed to come out and play. Still there was barely a dry eye in the house. 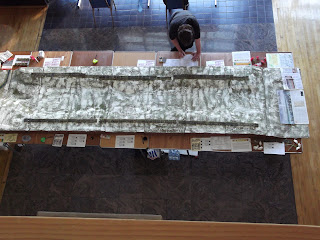 Ruarigh ponders over the rules and how to give the Lancastrians a victory. Everything is in their favour for this game, mainly me in charge of the Yorkists. 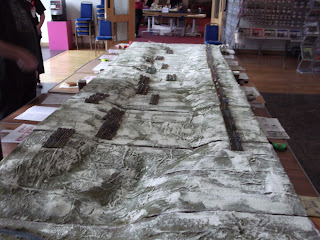 The ordering system from Poleaxed caused it's usual chaos, with several until including Northumberland's being confused by the order to advance. In fact one until went as far as returning to their home castle to check the dictionary, only to discover it wouldn't be written for another 150 years. The levy contingent on Northumberland's left decided advance was in fact was the old Norse for charge across the field screaming.

By the time the Lancastrians reached the Yorkist lines, they were a bedraggled bunch, and several unit had decided to leave the field. All this meant that Norfolk could stay tucked up in bed with a hot totty, sorry a hot tot of whisky.

It has been a fun and tiring journey with the Towton game. We never did have a Lancastrian victory, but we have played it through to a conclusion at every show. With a different kind of battle developing everytime, it has been a near run thing a couple of times. We met and talked to, and at, a lot of people and made some new friends. It's great to put faces to those anonymous seeming comments on the blog page. The game has been well received and even gained a prize at Salute.

A big thanks to all the people who have made this possible.

Peter Berry, Igor and all the others at Baccus, for their sponsorship of the game.

Freezywater for running up the flags in 6mm scale.

Graham, Leigh and Yorkie for there sterling effort at the painting and gaming.

Ruarigh for the mammoth amount he's taken on with project managing it, as well as sorting out rules, army lists and painting around half the figures. Oh and building most of the terrain. I'm sure he didn't sleep for about a year while doing this.

And thanks to you, for all the words of encouragement we have received, while setting these games up. It all helped to keep the idea rolling.

Next year we are hoping to go to a few shows with much, much smaller games. So if anyone wants to help with 'The Rather Small Skirmish Project' let me know.

Who knows, in a couple of years, we may have recovered enough to put on a bigger game again. Now where are the battle orders for Fulford, Stamford Bridge and Hastings :-).............

It is now. I have finally recovered from taking Towton to Derby at the beginning of October. It was a great show and we had loads of positive feedback from people. We were also able to field 18000 figures on the day, which was rather nice. We fought the battle to a conclusion on both days. It looked rather dicey for the Yorkists on the Saturday but they returned to their comfortable wins on the Sunday. So, that is it for this year. We never did manage to get the 25000 figures that was our target onto the table. On that basis, we must account the project a failure! The problem lay in not getting enough support from some people, who dropped out. In the end we only had four people putting the game on and I think we did rather well to achieve 18000 figures without killing ourselves, our enthusiasm or each other.

The game has now been put away, although the figures are likely to see usage in Impetus and possibly Bloody Barons games. We have been asked to take the game to the Baccus Games Day next year. That is a long while away and has been pencilled in to the calendar but a lot could happen between now and then.

On with the eye candy. I did not get much chance for taking photos of the games due to spending all my time talking to people, but there are a few to show you what we did.

The two armies deployed for battle: 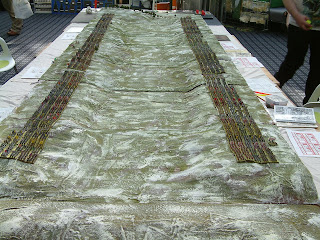 Steve checks the rules before the battle begins: 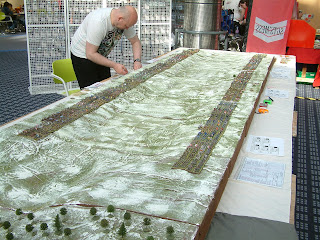 Graham and Steve battling it out as the Lancastrians advance at the double: 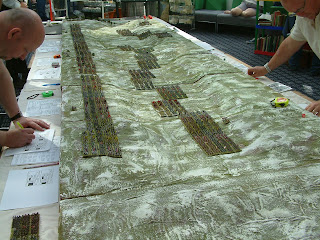 The big mistake on the Saturday was putting Steve in charge of the Yorkists! That led to all of their problems!! ;-)
Posted by Ruaridh at 17:47 1 comment:

A Rather Small Skirmish Project 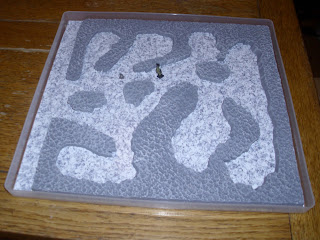 For the Baccus gamesday we are also going to be bringing a change of scale. It'll still be in 6mm, but this time it's a skirmish game. Just as a teaser here's some pictures of the box as it progresses. There is a 6mm dismounted knight and a troll to give an idea of scale. The box is roughly 300mm x 300mm. With a sheet of steel in the top and bottom of the box, covered in sticky back sheets, one granite, the other green velor. The scenery and the figures will all be magentic. Meaning you can change terrain and hopefully terrain and figures won't go flying if knocked. 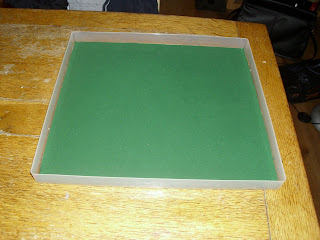 For the gamesday we'll be using the Broadsword Adventures rules and hopefully I should have 3 or 4 different scenarios which can be played.
Steve
Posted by Shorts2 at 19:54 5 comments:

Day 2 of Triples is over and I am knackered. Still, we had a fantastic day with a lot of positive comments again. It was great to meet all the people that follow the blog and I hope those of you that are pimping 6mm for big battles at your clubs succeed. Now, we need to get our creative hats on and improve the game again for Derby in October. Before that though, there will be a Baccus Games Day on July 17th (the day after the Baccus open day). A smaller version of our Towton game will be there as a participation game for up to six players at a time. Although there will only be about 8000 figures on the table, you too could get a chance to make the critical decisions in this battle.

Many will be asking how the games went. Very well, says I, with my Yorkist hat on. We managed to play the game through to a conclusion on both days, and the Yorkists won on both days. The second day was harder fought and saw leaders fall on both sides. It also saw significant treachery on the part of Northumberland, who decided to change sides with the same alacrity that Steve showed, when I offered to let him take command of the Yorkists late in the day. Steve happily left Graham running the Lancastrians and sped around to join the Earl of March and his compatriots as they routed the enemy.

Anyway, enough rambling. Thank you for coming and seeing us and making our outing to Triples worthwhile. Here are some shots from today's game. My apologies for the quality of my photography.

The Lancastrians advance piecemeal. Their command and control was woefully lacking: 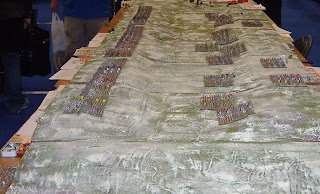 Views from the Yorkist lines: 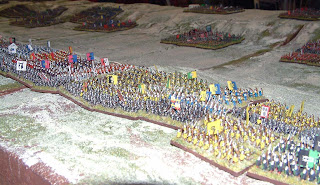 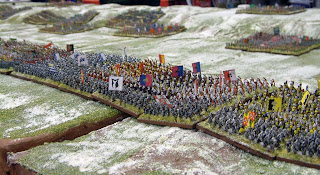 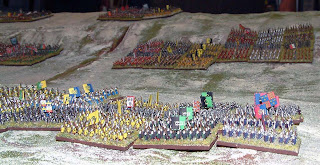 Bloody Meadow - Lancastrian routers trying to escape as others are cut down: 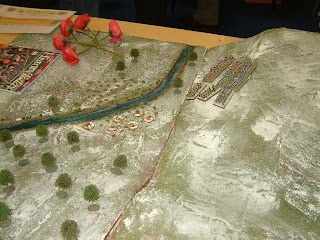 The melee develops as Norfolk arrives and the Yorkists take advantage of holes in the Lancastrian lines. Fauconberg's command suffers badly from the Lancastrian ambush, but the rest of the Yorkist are busily routing Lancstrians and then turning on the flanks of their neighbours in the battle line before advancing towards the Cock Beck: 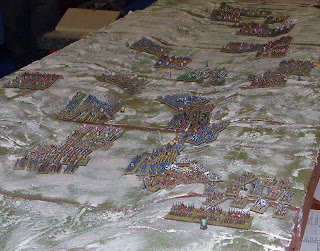 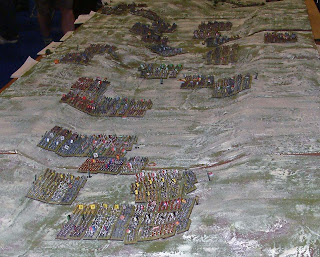 Blimey, I'm exhausted already and there is another day to go. I would just like to say thank you to all of you that dropped by and made positive comments about the game. We had a great day talking to everyone and even managed to complete a game.

About 10am: The troops are all deployed and ready to be moved 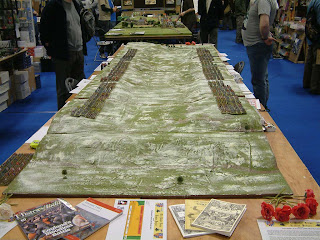 We decided not to move them for the first hour or so to give people a chance to see the armies deployed. That went on longer than expected because of the number of people looking and talking to us.

Sometime in the afternoon: The Lancastrians have started moving but two contingents are worried about the plan and awaiting reassurance. They would have changed sides if the enemy had contacted them. 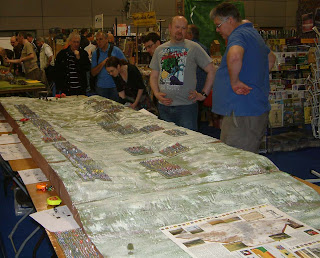 So, as I wrote before, we completed one game, which was more than we expected and rather surprising given how busy we were. It probably helped that in the first melee of the game Steve managed to get Holland and Exeter killed. With the battle effectively headless and its commander's troops fleeing for their lives, Edward was able to turn on the flank of the rest of the battle. It would not be long now before the Lancastrians were fleeing for Bloody Meadow ...
Posted by Ruaridh at 19:01 1 comment:

As you might have gathered from our jubilation, we received the Most Impressive Troops award at Salute. Here is a rather blurry photo of Steve looking stunned as he meets his hero, Rifleman Harris. Oh yes, and receiving the award, which is clear and therefore not readily visible in the photo. 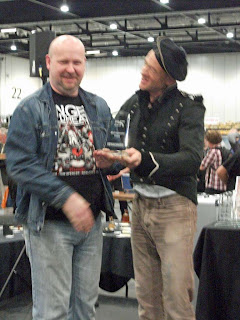 This project is being undertaken in association with: